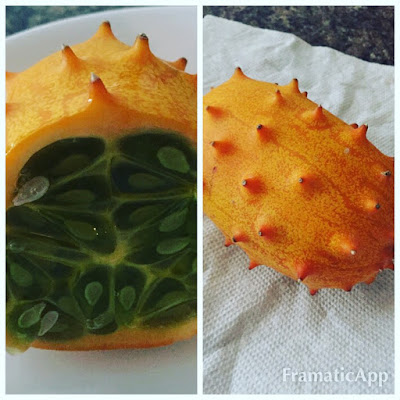 Ok, I know.  Not a recipe.  But every once in a while my daughter and I spot some new fruit at the grocery store to try.  This time it was this (slightly dangerous) melon called a "horned melon" for obvious reasons. Yes, those little spikes are sharp. This fruit is also called "Blowfish Fruit", and you can see why.

Originally from Africa it is now grown in California and Mississippi as well as other countries. The fruit can be eaten raw as a snack, in which some people with suck out the pulp and spit out the seeds. When I tried the fruit I used a spoon and ate the seeds which I did not enjoy and now wish I had spit them out. Apparently you can eat the peel also as it is high in vitamin C. The inside is jelly like.  I've seen recipes for drinks made out of this that might be good.

The flavor is hard to describe, it was sweet but not overly.  It is described as a cross between a banana, cucumber, lemon on Wikipedia.  You can add some salt or sugar, which I didn't know either until after I'd eaten it. It is also fairly pricy, I think we paid $4 and some change.   Overall, I'm glad we tried it.  It wasn't bad but the price combined with the fact that it wasn't totally delicious makes it highly unlikely we'll be buying it again.