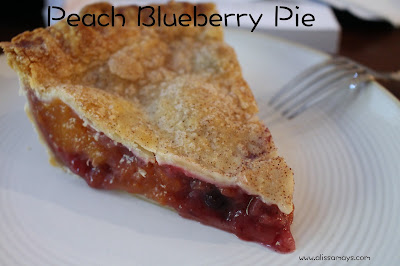 It's peach season in the South so naturally we've been eating all we can.  I love to can peaches but haven't had time this year, so we've just been eating them fresh.  However, to change things up a bit I decided to try a pie.  Blueberries are my husbands favorite so when I saw this recipe I thought it was perfect.  Also, I had a handful of raspberries in my refrigerator so I threw those in too.

I loved the flavor of this pie.  Sweet and interesting because of the multiple fruit flavors.  The mixture is perfect and held up very well when sliced and served up. Perfect with some ice cream or whipped cream.

I just used a store bought crust which is not what I normally do, but it was still delicious.  If you make a homemade crust it'll be the hit of dessert!  I hope you can try this one this summer with some of your local peaches.