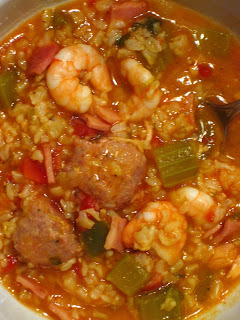 It's been cold here lately, in fact we're expecting snow tonight or tomorrow sometime.  I'm telling you this because cold weather always gets me thinking about comfort food.  Something warm and delicious.  Recently I was at a New Years Eve party where Ashley gave me her Nana's Jambalaya recipe!  What a treat to be trusted with a family recipe.  Now, I have no idea if I did it justice or not, but I followed it to the letter and I have to say, the final product is pretty darn amazing.

Jambalaya is one of those things that everyone in the South seems to have their own way of making.  It really could go in a million different directions.  I hope you'll give this a try, it's a keeper! 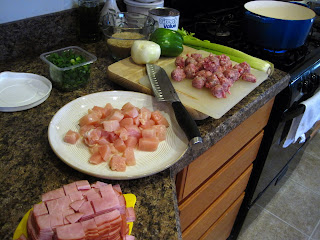 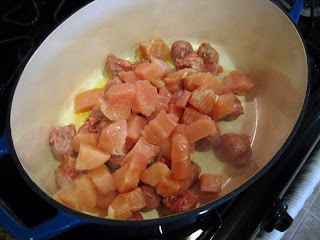 I began by putting a small amount of oil in the bottom of a very large heavy pan and then adding the chicken and the sausage.  I let this brown a little before adding anything else. 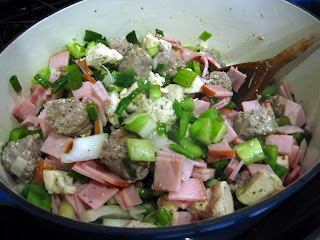 Next I added the ham (which was already cooked, I couldn't find exactly what I wanted but I couldn't be too picky) onions, green peppers, spices, celery, and scallions. I let these cook together for about 15 to 20 minutes. 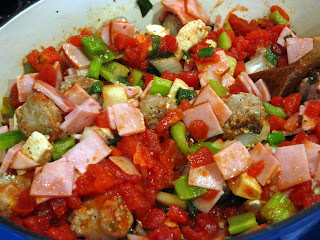 In go the tomatoes 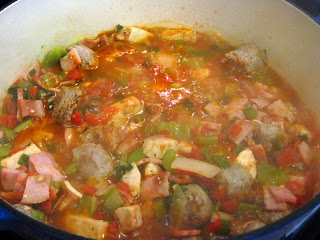 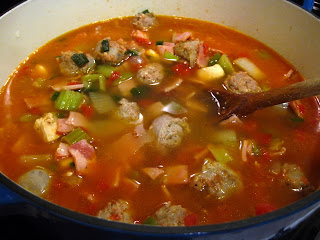 Next I added 5 cups of chicken broth and brought this to a boil. 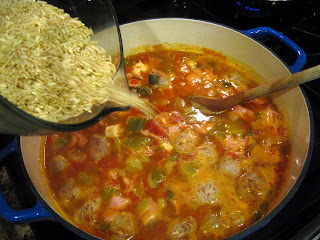 Now the rice.  I used a whole grain brown rice (not the quick cooking kind) 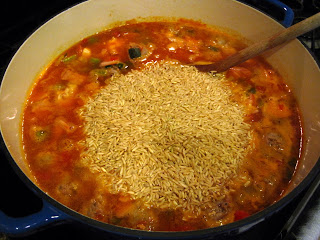 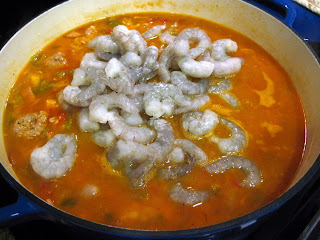 Add the shrimp in after the rice is done and watch it carefully.  The Shrimp is done when it turns pink.

This had a wonderful flavor and was just exactly what I was looking for on a cold day.  The sausage I used was Sweet Italian and it was so tender, the chicken was juicy and all the flavors melded nicely.  My husband also enjoyed it said I could make it again anytime!  This makes a lot, I would estimate it would serve between 8 to 10 people.  Don't forget to serve with some bakery bread to sop up all those good juices.

In a large pot add a small amount of oil, then add the sausage and chicken.  Let cook for about 5 minutes and then add the ham, onion, green pepper, celery, scallion, garlic, salt, pepper, and thyme.  Let this cook for 15 to 20 minutes stirring often.
Next add the canned tomatoes, and the chicken broth.  Bring this up to a boil and then add the rice.  If you're using regular (not quick cooking) rice then simmer with the lid on for about an hour checking frequently until the rice is tender.  Add more chicken broth if needed, stir frequently to make sure there is plenty of broth and that its not sticking on the bottom.
Once the rice is done add the shrimp and cook until they are pink.  Shrimp cook quickly so keep checking it.
Serve immediately.
Posted by Alyssamay's at 5:59 PM