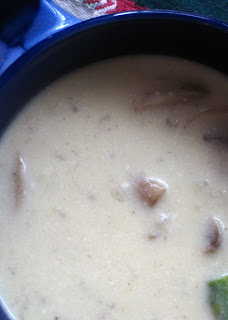 It's been sort of chilly here lately, and because of that I think of soup.  I mean, really good soup not just a can of it.  I've tried several lately that I really like but I needed to browse for a recipe that called for ingredients I already had in my house.  I wouldn't want to go outside after all, it's cold out there.

I found this recipe for Golden State Mushroom Soup and it just so happened that I had mushrooms.  I tell you this because that's a big deal, what are the chances that I'd have mushrooms just sitting around not reserved for another recipe.  I feel like maybe it was fate.

Anyway, it was just enough reason for me to choose this recipe.  I'm so glad I did because I altered it slightly and I feel like the base of this recipe can be used for any kind of creamy soup.  Whatever you have in your house at the moment. 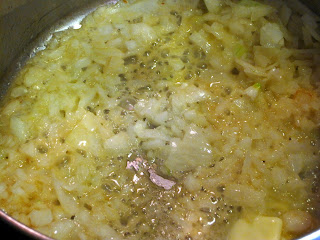 Add some diced onion to some melted butter and cook until tender. 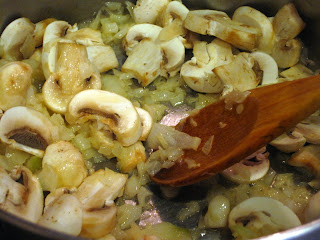 Next add the mushrooms.  This recipe called for a pound of mushrooms, which I didn't have. 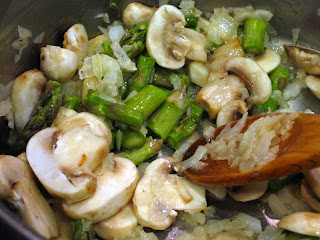 But I DID have some asparagus so I cut up some of that too. 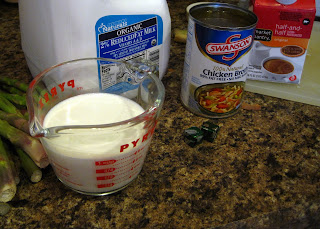 The recipe also only called for milk, however I had some half and half I needed to use so I used 1 cup of half and half and 1/2 a Cup of milk.  Are you confused yet? 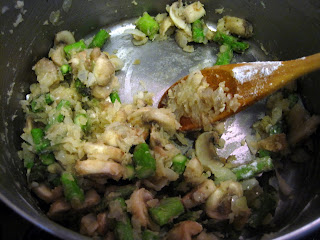 Next add some flour and stir it around until it coats the veggies. 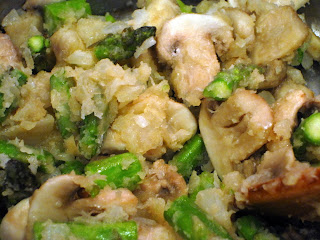 Cook the flour for a couple of minutes to get rid of that raw flour taste. 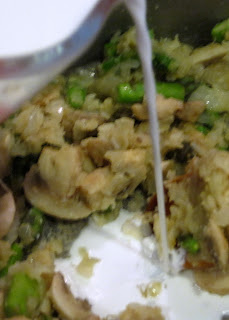 I added the half and half next, stirring while pouring to make sure there are no clumps of flour. Add the milk next. 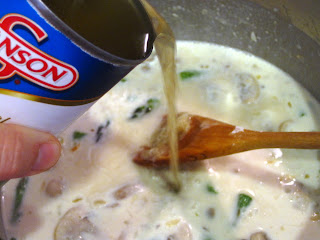 Next add a can of chicken broth. 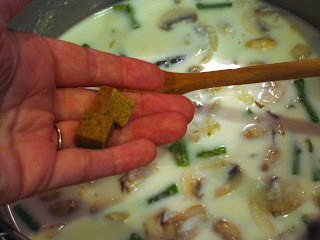 The recipe called for chicken bullion granules but of course I didn't have those, so I used two cubes instead. 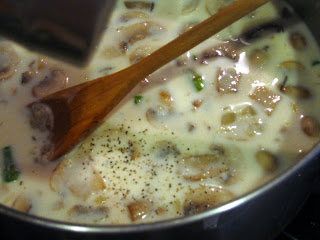 Add salt and pepper to taste.  Stir frequently as this will begin thickening up now. 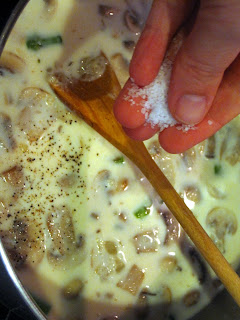 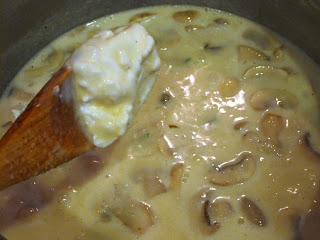 Now the sour cream.  I'm sorry my sour cream looks weird above.  I had already dunked it into the soup and then remembered to take the picture; so out it came for it's close up. 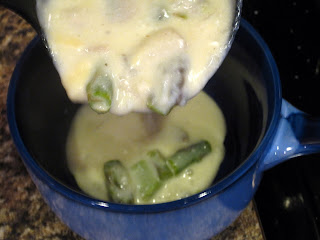 This was nice and creamy and perfect for a cold day.  This is going down as one of my favorite recipes and I can't wait to experiment with it and different veggies or meat.  Yum.  Try this one for sure!

Here is the recipe with my modifications:

Saute the chopped onion in the butter until tender.  Add the sliced mushrooms and asparagus and cook until they begin to get tender.  Add the flour and coat the veggies well, let cook for a few minutes.  Add the milk, half and half, broth, bullion, salt (keep in mind that the bullion is salty) and pepper and bring to a boil.  Stir continuously until smooth. Add the chicken bullion cubes and stir to make sure they break apart and dissolve.  Add the sour cream and mix well.

Email ThisBlogThis!Share to TwitterShare to FacebookShare to Pinterest
Labels: Main Course, My Favorites, Side Dish, Soup